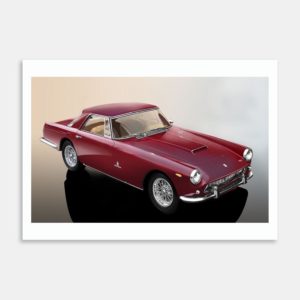 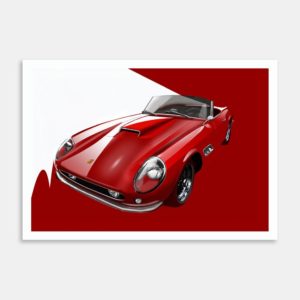 Printed on gallery quality acid free art paper using archival pigment inks you will enjoy this art print for many years to come.

The Chevrolet Corvette is the second generation of the Chevrolet Corvette sports car, produced by the Chevrolet division of General Motors for the 1963 to 1967 model years.
The 1963 Corvette Sting Ray not only had a new design, but also newfound handling prowess. The Sting Ray was also a somewhat lighter Corvette, so acceleration improved despite unchanged horsepower. For the 1963 model year, 21,513 units would be built, which was up 50 percent from the record-setting 1962 version. Production was divided almost evenly between the convertible and the new coupe – 10,919 and 10,594, respectively – and more than half the convertibles were ordered with the optional lift-off hardtop. Nevertheless, the coupe wouldn’t sell as well again throughout the Sting Ray years. In fact, not until 1969 (by which time the coupe came with removable T-tops) did the closed Corvette sell better than the open one. Equipment installations for 1963 began reflecting the market’s demand for more civility in sporting cars. The power brake option went into 15 percent of production, power steering into 12 percent. On the other hand, only 278 buyers specified the $421.80 air conditioning; leather upholstery – a mere $80.70 – was ordered on only 1,114 cars. The cast aluminum knock-off wheels, manufactured for Chevy by Kelsey-Hayes, cost $322.80 a set, but few buyers checked off that option. However, almost 18,000 Sting Rays left St. Louis with the four-speed manual gearbox – better than four out of every five.

There are no reviews yet.

Only logged in customers who have purchased this product may leave a review.

Our one stop shop

With dozens of intelligent concepts, you’ll find what you’re looking for in our store, and it will be unique and personalised to match.

Our customer support is second to none - users rave about how we don’t rest until every issue is solved to their satisfaction.

We’ll gladly replace your print if your print has been damaged in transit or there are any defects. Just send us an email and we'll sort the rest.